Urgent message from AZ about the border and Obama admin 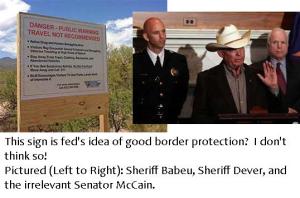 Sheriff Dever has confirmed and has a special message that we need to hear! He has just returned from a Congressional hearing in DC.  The Arizona Tea Party contacted my friend Mark Hager last night and wanted to make you aware that:

“Sheriff Dever’s Dept. (Cochise County) and also the Pinal County Sheriff’s Depts (Sheriff Paul Babeu) which are the two counties that are directly on the AZ/Mexican border, are now being sued by Obama and Eric Holder to prevent them from enforcing immigration laws? Mark, this situation has become extremely dangerous now. Not only are thousands of illegal Mexican immigrants crossing our border daily, we have thousands of OTM’s (Other Than Mexican….a-hem, middle-easterners).  Obama and Holder want to stop these Sheriff Depts from apprehending them, and handing them over to ICE for deportation.”

Folks, this situation on our southern border is dire and our own government is working hard to make it worse!!!  Please call the White House comments line 202-456-1111, White House switchboard 202-456-1414, or the Congressional switchboard 202-224-3121.  Shut their phone lines down with demands to simply enforce existing immigration law!!!

I believe in the CONSERVATIVE principles and values of the Republican Party as they are written, and not how they are currently practiced by today's RINO's. Smaller government, lower taxes, more personal responsibility, states' rights, free market capitalism, and less government intrusion in our lives!
View all posts by Christine →
This entry was posted in NCGOPCON, TEA Party, US House, US Senate and tagged AZ, eric holder, ice, immigration, mexico border, otm, sheriff babeu, sheriff dever. Bookmark the permalink.