Here is evident of what Obama is about and why he needs to be impeached.   Wishful thinking — ‘If only I could be a dictator’….if it wasn’t for this darn pesky America Nation – U.S. freedom – “U.S. Constitution ‘of negative Rights'”(as once stated by Obama) representative republic stuff. National Council of La Raza shows true colors here — non-immigrant illegal invaders who want nothing to do with adapting or assimiliating to America or the U.S. flag — as they chant that they would rather change America to what they want — they prefer a dictator — like where they come from. Shame Obama doesn’t want to help them understand their U.S. freedom here. (Sure many in this audience are illegal Aliens however).  NCLR was given $11 Million taxpayer money by Obama to help with illegal invasion and thieving of the U.S.   NCLR continues to be a race-based extremist organization that violates U.S. laws and the U.S. Border in multiple ways (helps illegal Aliens get driver licenses, benefits in the States).  NCLR has waved the Mexican flag and foreign flags publicly thru its time here on U.S. soil.  NCLR should be repudiated by ALL Congressman.  Traitorously we’ve seen several Congressmen give speeches to the NCLR in the past — Lindsey Graham, John McCain, Jeff Flake, Dick Durbin, Barbara Boxer, Joe Lieberman, Joe Biden, Richard Lugar.   This deplorable NCLR speech goes along with Obama’s impeachable scandal (operation ‘fast & furious’) of giving illegal firearms via the ATF (Eric Holder and White House knew) to drug cartels in Mexico to assist assualt on Americans and the U.S.   Obama panders here to Hispanic vote while offering them enslavement by dictator socialist controls.  Hispanics should not be fooled by President who wants to do away with their freedom and laws of the U.S. Nation which such freedom is why immigrants continue to desire to come to America LEGALLY.

Don’t be fooled by well-dressed NCLR meeting attendees in video.  The real face of NCLR is this: 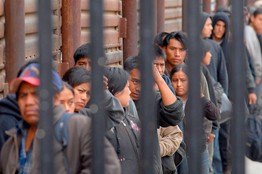 It was just 2 months ago that a Mexican trailer truck heading for the U.S. Border was stopped with 500 illegal Aliens crammed inside.  The CA State budget has $10 Billion going to illegal Alien costs.  Cost to U.S. by illegal Aliens is $113 Billion annually.  While illegal Aliens are of all types ethnicity or nationality (Chinese, Russian,  Asian, Hispanic, German, White, Black, Arab, etc.),  it is quite clear where the majority problem comes from — the U.S.-Mexico Border, and what group (NCLR, MALDEF, LULAC, Latino Coalition, Mexican Consulates, ACLU, SEIU) clamors most to impose its foreign illegal intrusion on the U.S. (and it is this hostile clamoring to impose a foreign way, language or will on the U.S. that further proves it as invasion, NOT immigration) –to simply not abide U.S. law and not be deported.

Obama says here, “we are enforcing flawed laws”.  According to Obama and his actions, the U.S. shouldn’t bother with a Border or being a Nation anymore and what the heck,’why have U.S. laws at all’ because we can just ignore U.S. principles, Constitution and the U.S. flag altogether.  Time and again this President and his wife have shown his negative stance and putdown of the U.S. Nation, as if the U.S. deserves it or owes something to somebody.  A facade and a Lie is trying to USE  ‘color of skin’ or the purview of race or “racism” as a means, or disguise to then impose National insurrection, impose a foreign system such as socialism (communism) and/or hence then destroy the U.S. Constitution, U.S. principles and harm U.S.  capitalist free market economy.

Now, we have  Obama wasting money again illegally suing the State of Alabama, suing States Rights and the People to protect themselves with legitimate law, and helping illegal Aliens to violate the U.S. and steal more money.  Instead of wrongly and illegally having the U.S. theived and intruded that has harmful, negative impacts to all society(jobs,wages,crime,ID theft), the above groups and such concerned persons would do better to raise charitities to help illegal Aliens in their home country of origin before they become illegal by doing illegal entry of the U.S.

Obama has in fact already attempted to “bypass Congress” (stated in video) by executive order fiat in July 11th memo to Homeland Security & ICE Dept. to stand down, not do their jobs and simply not enforce against illegal Aliens or deport those who fit a list of some 27 citeria – such as– if illegal Aliens are in school or college, if they have an (ILLEGAL) job, how long they been in the U.S., if they served in military….much to the effect of the (8 time wisely discarded Amnesty) DREAM Act.  Hence, impeachable offense to try an enact legislation bypassing Congress and will of the People.   A bill has been made to throw out the President’s memo orders — called the HALT Act – urge Congress to support HALT Act.

22 Responses to Obama’s shows his true change for America