I was asked recently by the NCGOP Chair, “Are you more TEA Party or Republican Party?”

Huh?  But they’re not mutually exclusive?  They’re different and also the same like I am a woman and an American.  I really didn’t know how to answer that, but finally said, “I’ve always been a Republican.”  He accepted the answer without further inquiry, but it really made me think.  So, let me start from the beginning.

We’re just people who have had enough of the same old games, the incalculable spending, the excuses, and the political shift to the Left that cause us to pay increasingly more in taxes.  Enough!  We’re asking for accountability and responsiveness in government.  At the center of this “TEA Party phenomenon,” we did not want, or need, Obamacare/nationalized healthcare.

The TEA Party shares a great deal in common with the American voters – remember Nov. 2010?

Back to my original point, I am a true believer in the GOP.  I am as conservative as Rush Limbaugh.  I raised my daughter listening to Rush and Dr. Laura.  That’s mainstream conservative GOP thought.  Right?

I share no philosophical ideals with the Democrat platform – nothing.

However, I am not a supporter of Republican politicians who abandon the platform, and legislate or govern as amoral, irresponsible stewards of taxpayer money.  That makes me sad, and, honestly, has contributed significantly to our $15.4 trillion national debt.

Now, not all TEA Partiers are Republicans.  In fact, many are Independents / Unaffiliated, Libertarians, and even an occasional conservative Democrat. But all share common goals with the GOP philosophy – smaller government, more personal responsibility, lower taxes, etc… and thus they should be seen as an important constituency to the GOP in a 2012 victory.  Of the two Parties, there is only one logical choice votes. One thing that’s for sure, all registered Republicans asking to be involved with sometimes painful process of GOP politics are indeed Republicans first.

So why was I asked that question?  It might be safe to say there is a misunderstanding.  The TEA Party thinks somewhere along the way, the GOP has forgotten their roots and abandoned their own platform.  But the GOP probably only knows the strident, angry, sign-carrying mob who has had enough!  I guess we’ve both come along way since November 2010.

The commonalities between the GOP and the TEA Party are so numerous, that I don’t even know how we got here.  There is plenty of common ground on which to work together and defeat Barack Hussein Obama – the most destructive president in American history!  Our goals are absolutely the same and inclusive – not mutually exclusive.  We may differ on which candidate we support in the Primary, but that’s the nature of the Primary process.  We’ll all come together for the General election. 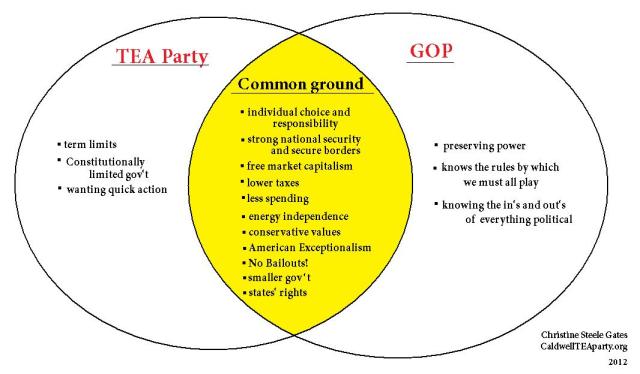 So where does that leave me?

I’m attempting to stand in the middle, trying to bridge this divide.  I know no one who wants to start a third Party.  I know some who have called me names for being too persuaded by the GOP and a kool-aid drinker for my compliments and support of the GOP.  Sometimes I can’t win with either side, but I still work like the very existence of America depends on my effort.

I stand in the middle with the Constitution, with the rule of law, with the NC GOP Platform, and with Conservative ideals.  I am not a GOP outsider, but I’m asking to help win this election and educate voters about the philosophies that make the GOP so great.

Here’s where I become strident, even though I stand in the middle, I don’t want compromise with the Democrats’ Socialist agenda.  I want change in the direction of less government spending, SHRINKING the current size of government – like what has been accomplished in North Carolina in 2011.  It is unacceptable to just reduce the rate of growth in government.  We must shrink spending, the national debt, and the size of the government.  We must begin today and carry it into tomorrow.

I love this country.  I love my family.  I agree with my Republican Party.  The TEA Party and the GOP are certainly not mutually exclusive teams. We are overlapping subsets of philosophies.  Or maybe it’s better to say we are two sides of the same coin.

We must defeat Obama and the only way we can do that is by electing republicans to all levels of government.

I believe in the CONSERVATIVE principles and values of the Republican Party as they are written, and not how they are currently practiced by today's RINO's. Smaller government, lower taxes, more personal responsibility, states' rights, free market capitalism, and less government intrusion in our lives!
View all posts by Christine →
This entry was posted in Caldwell County NC, Caldwell County NC GOP, National politics and tagged 2010", 2012, common ground, gop, mutally exclusive, ncgop, Tea Party, victory. Bookmark the permalink.

15 Responses to TEA Party and GOP Not Mutually Exclusive