It makes sense to me! 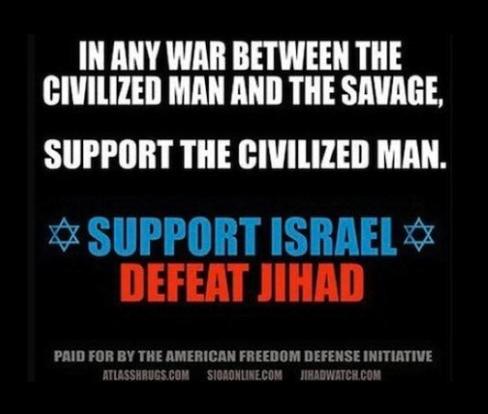 The sign makes sense to me.  I understand the critical nature of the survival of Israel.  However, this ad / sign has been banned on the MTA buses.  No matter how you slice it, “the civilized man” doesn’t encourage their children to blow themselves up and kill as many other innocent people as they can, just because they belong to a different religion.  DEFEAT JIHAD.

Now there’s the other issue of how the First Amendment is applied to speech now-a-days.  So, the 1st Amendment covers speech that is blatantly anti-Christian, anti-men, and anti-traditional values, but not speech that is anti-Islam.  How did Islam become above the First Amendment??  Who decided who gets to make these rules?  How have we become a society of people who think it’s unconstitutional to be offended?  Grow up!  Speech in America after 1776 was free from censorship from the king and government, but we have a new king in town.  Now we have armies of PC police in universities and Lefty law firms ready to pounce on dissenters.  Our forefathers fought against the limited speech of their day that criticized their leaders and commented on the issues of the day.  Now more than ever, as our country is teetering on this cliff’s ledge, our freedom to speak freely is paramount to our ability to have open dialog to save our great country.

Radical Islam and the Jihad they are waging against the Western societies is a problem.

And while you’re there, purchase the $9.99 monthly subscription for TheBlazeTV and radio.  It’s worth every penny.

I just saw this on the DrudgeReport.com headline: Obama is going to give Egypt (aka the Muslim Brotherhood) $450 million. Because directly funding terrorism is exactly what we need to do [sarcasm]!