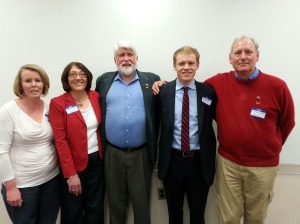 GOP Chairman, Sandra Jaynes was elected 1st Vice Chair (she prevailed over Christine Gates by only 5 votes in the first round of voting), while Steve Bogdan 2nd Vice-Chair, Iris Whitt Secretary, and Destin Hall Treasurer all elected by unanimous voice vote as recommended by the Nominating Committee.

There were constructive changes made to the Caldwell County GOP Plan of Organization.  If you missed the convention, you actually missed a good one.  There were only 68 delegates at the convention.

3/14 – Caldwell County Republican Party county convention. Starts at 9am, registration opens around 8am. Breakfast food will be available to purchase. This is open to all registered Republicans living in Caldwell County. You must be a registered Republican by 1/31/15. It is free. This is your best and only chance all year to make changes to YOUR party. A new Chairman will be elected at this convention. DOORS WILL CLOSE AT 9AM. IF YOU ARE LATE, you will not be allowed to vote or participate, but you can watch. All you have to do is just show up on time! At the Caldwell County Library, 120 Hospital Ave, Lenoir, NC  28645.

This is your only chance to decide the direction of YOUR LOCAL REPUBLICAN PARTY in Caldwell County.  Electing a new county Chairman and officers only happens every two years.  Precinct Presidents and Secretaries will be elected, too.

Rumors are three people running for chairman: Kay Roukema, Phil Ingle, and Pete McEllwain.  Come hear what they have to say and cast your vote for the best one.  You decide who is best to lead the Republican Party in Caldwell County.  It’s your vote. It’s your civic duty.